Supergirl Flash Crossover is Happening!!! Sorry very excited. We all knew this would happen but thought it would have to wait for season 2 of Supergirl. Supergirl Flash Crossover makes more sense than any other hybrid with the CBS world. According to CBS and CW this will happen Monday March 28. Ratings should be great with so many kids out of school for Spring Break. 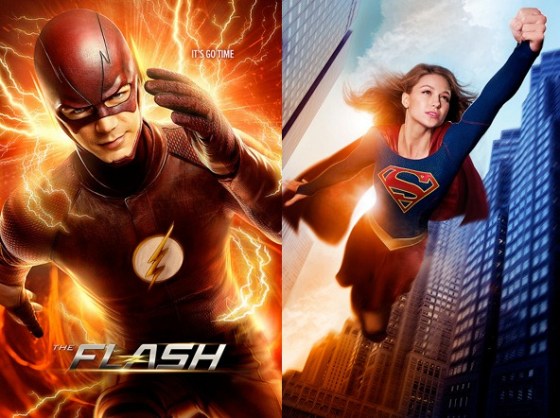 CBS and The CW Network announced Tuesday that two of their respective shows will collide this spring. The Flash will appear in an upcoming episode of Supergirl, combining the two superheroes into one action-packed hour.

Actor Grant Gustin, who plays Barry Allen/The Flash in the CW’s The Flash, will make his way into National City alongside Melissa Benoist, who stars as Kara Danvers/Supergirl, on the special Supergirl episode slated for Monday, March 28 at 8/7c on CBS.

“We are so incredibly excited to announce something that we have dreamed of happening since we starting making Supergirl,” said The Flash and Supergirl Executive Producers Greg Berlanti and Andrew Kreisberg. “We want to thank Grant Gustin for making the time to come visit (on top of his already immense workload) and all of the folks at CBS, The CW, Warner Bros. and DC for working this out.”

The producers also took the opportunity to thank the many fans and journalists who “kept asking” for a crossover special.

“It is our pleasure and hope to create an episode worthy of everyone’s enthusiasm and support,” said Berlanti and Kreisberg.

How will the two superheroes work together? Be sure to watch Supergirl Mondays at 8/7c on CBS to find out.

If you are not watching Supergirl, START!!! The show is amazing. Check out this scene from last week’s encounter with a White Martian. This week Kara took on Bizarro Girl. The previous week, my favorite so far this season, involved the Toy Man. The show has a lot of great special effects but at the core are great characters and tons of heart!!!