DAWN OF JUSTICE Batman/Superman Worse Than I Feared

DAWN OF JUSTICE Batman/Superman Worse Than I Feared

I kept an open mind. I read no reviews. I avoided spoilers – other than DAWN OF JUSTICE trailers that showed far too much. DAWN OF JUSTICE is the Superhero movie equivalent of revealing anything remotely good about his movie in the trailers – and that was a low bar to start.

First of all I have to say up front I have no issues with any single performance. The actors can take no blame in this fiasco. I was expecting to hate Jesse Eisenberg as Lex Luthor. On one hand I did, but got him as the bratty Lex Luthor Jr. And we got more of the Mad Scientist power hungry Lex of the 1940s (Before he was called Lex I think). He was a younger conglomerate of all the Max Fleicher villains.

Before tearing it apart, let me mention the one moment I thought worked.

Not Diana Prince’s reveal. I think if they never teased us in the trailers, Zack would have pulled off this idea that a mysterious woman is thwarting Bruce Wayne’s attempt to dig information on Lex. But we know who she is. So mystery gone. Not sure I love Gal Gadot yet. Her moments out of costume were strange. More like Elektra than Diana Prince. But the best part of the movie is basically the concept art in motion – Wonder Woman in the heat of Battle -which serves to promote Wonder Woman 2017.

I really like this Alfred as well. So much more than a Butler, Jeremy Irons’ Alfred was a more key component to the Batman legend than ever.

DAWN OF JUSTICE flawed on so many levels.

Um, WHAT SCRIPT? I am guessing there was an amazing 4-hour movie (being very kind in this assumption) but they left anything from the script on the cutting room floor – or recycle bin in the new digital world. Most of the script was a series of VO monologues and short 1-liners, which is OK in many action films, but this movie took its script WAY too seriously to pull off such a bad script. $250 million should afford a GREAT script doctor at least.

SPEECHLESS… Hard to direct a bad script, I get it. But the few moments that could have had heart had ZERO.

Only thing worse than the script was the CGI. Action sequences were so blurred, I kept  thinking this is what Cloverfield could have been if it got any worse.

I can only guess that when the sound editor watched the film he said, OMG this sucks. I better crank this terrible score LOUDER so no one falls asleep. Sorry, maybe I am just too much a John Williams freak, but this maybe James’ worst yet. Most notably is Lex’s theme. It was like a bad version of Otis’ theme from Superman The Movie.

DREAM SEQUENCES – So I suppose the team got through this movie and figured, it sucked. So they went back and inserted dream sequences for Bruce Wayne to give the film artistic moments.Unfortunately these were the only interesting parts of the film, except they were so disconnected, they were just too jarring. And they were the only time you felt like you were watching a movie at all. (And don’t get me started on Parademons looking like Wizard of Oz Monkeys)  #WTF

GOTHAM is just the SLUM of METROPOLIS?  – Seriously? Gotham was right across the river form Metropolis.  Metroplis is Manhattan. Gotham is Brooklyn? Why does Batman even still get out of bed. Gordon would flash a Bat Signal, Clark would be like, “I got this!” AND… SCENE. I hated this plot device more every time it was made clear. #WTF

SUPERMAN ALWAYS FLIES IN TO SAVE LOIS – OK This is the way it has to be. I want that to be the case. BUT somehow in this movie, I just did not believe any of it. #WTF

MARTHA – Batman wants to kill Superman until he mentions “MARTHA!” Batman thinks of his own mother. I felt like a dummy as I never realized their mothers shared the same name. DUH? So kudos for Zack on that one I suppose. But hearing his mother’s name is obviously Batman’s kryptonite. The sequence was so badly written, directed, acted… #WTF

JIMMY OLSEN. is actually a CIA type posing as a camera man. I don’t think we ever hear the name, but as soon as you see a young camera guy, we all thought, HEY IT’S JIMMY! right before they… (If you saw the movie, you get it, if not, you will) #WTF

WALLACE KEEFE – It was a little predictable, but I get the idea of a Black Zero victim becoming a Vietnam Vet type. I thought they were going to give him an alternate Metallo origin. That would have been cool.

MERCY – We have scene Lex throw Mercy under the bus in the past, but I was hoping she would be more than a high powered secretary. Bruce Wayne clearly is not looking for the bathroom. DCAU Mercy was bad ass. This was pathetic.

LEX LUTHOR PARTY – UM? Anything good about this scene? NOPE! This was one time they could have forwarded the story. LEX is clearly deranged. BRUCE is clearly not supposed to be in the kitchen area. DIANA is just useless. CLARK is clearly super strong. DUH? Did anyone check teh script before going to shoot. I make this rookie mistake all time making youtube videos. But $250 million should by a great script doctor.

FORTRESS OF SOLITUDE? I was all excited to see Kal El in this ice palace. But all we got was a mountain man Clark hiking the Alps talking to his Dad. Oh and this Fortress of Solitude did not have holograms of Jor El, just visions of Kevin Costner, speaking more gruffly than ever. Seriously is this the alternate reality where Batman AND Superman drop acid? That was the first time I said – THEY ARE GOING TO KILL HIM!  That pile of rocks and sticks was clearly the Death of Superman cover recreated with rocks and sticks and a little snow.

HOLLY HUNTER – HOLLY HUNTER (sorry I think we called you Helen Hunt in the podcast) is an amazing actress. She did her job to the nines in this movie. But again, script and direction – and editing – can limit the best of us actors. The one moment in the whole movie I thought was executed well, was Helen Hunt’s realization she is FUCKED. But that just that one moment. And I mean the 2 seconds when she realizes, which clues Superman, which cues… As soon as you saw the mason jar we all knew what was in there. The second we saw the impressive set of wheels we knew what was to happen. It took the

KGBeast OR FIREFLY – I knew I recognized Anatoli Knyazev. But when he was brandishing the flame thrower I was sure he was trying to be Firefly. Had to look up the name in DC Comics lore to remember his true villain title. This is a perfect example of a movie taking a cheap TV shortcut. Let him be KGBeast. If this is CW Arrow and you do not have budget let him just be a mercenary or prisoner of Ivo aboard a ship called Amazo. But this is a movie. You have technology now to do what could only happen in comics and cartoons 20 years ago. GO BIG OR GO HOME. I wish I went home. Or stayed home… I digress…. 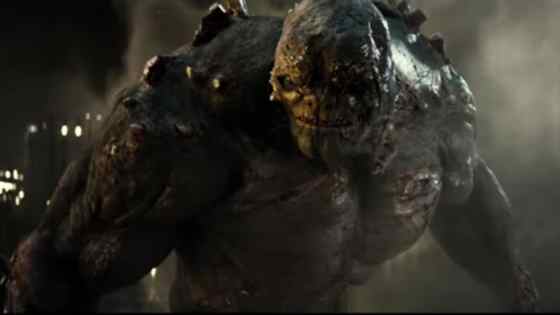 DOOMSDAY – I was always OK with the extra powers given to Kryptonians in Superman 2. But this Doomsday…. I am glad he was less of the Bizzarro origin I was expecting. I like that Lex basically got into Zods computer files and recreated the actual experiment that created Doomsday in the comics. At some point, I think Doomsday burped. It was ridiculous. And maybe it was more of a afterbirth process, than a superpower, but he kept giving off these massive power bursts that destroy 10 city block radius. #WTF

WE GET IT – NOTHING in this film is even remotely a WOW moment. The plot is more transparent than Shakespeare Julius Caesar, or any other historical drama. When Bruce Wayne discovers the footage on the future Justice League team members, I was simply disgusted. I had high hopes for all these characters. Now? EH… But worst of all, Clark and Lois’ final moment. SERIOUSLY? “UM I’m going to die now” And what happens?

I liked the idea of two funerals on paper. The big Soldier send off was reminiscent of the Death of Superman Comics. I think I may have even seen a few would be heroes in the crowd. But the Smallville send off seemed more like a scene from Amish reality show.

Now, saving this for last, even though it was telegraphed, I am glad they killed him. Like the comics 20+ years ago that was a bold move. The DCAU Death of Superman was less than perfect.

FLASH – UM, so this Barry Allen is some a hipster or hippie? Maybe he will shave for the hero moment.
AQUAMAN – I liked all of the concept art. The sequence is terrible.
CYBORG – Fingers Crossed. I see great potential, just did not see anything interesting yet.

I usually wold never do this, but…

I CALL FOR A TOTAL BOYCOTT OF THIS MOVIE

I am going to go watch marathon Supergirl on CBS followed by rewatch of Daredevil. I need a superhero mitzvah!

Based on what we see, I do have hope for the spin off Projects. I want to see Ben Affleck’s Batman, Gal Godot’s Wonder Woman etc. I have high hopes for Darkseid in this movie’s sequel. Not based on this movie, but more out of desperate hope for recapturing the DC universe I grew up loving.