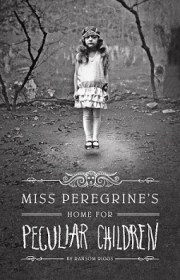 Miss Peregrine’s Home for Peculiar Children is the debut novel by American author Ransom Riggs. The book tells the tale of a boy who, following a horrific family tragedy, follows clues that take him to an abandoned orphanage on a Welsh island. The story is told through a combination of narrative and vernacular photographs from the personal archives of collectors listed by the author.

This young adult book was originally intended to be a picture book featuring photographs Riggs had collected, but on the advice of an editor at Quirk Books, he used the photographs as a guide from which to put together a narrative. Riggs was a collector of photographs, but needed more for his novel. He met Leonard Lightfoot, a well-known collector at the Rose Bowl Flea Market, and was introduced to other collectors. The result was a story about a boy who follows clues from his grandfather’s old photographs which lead him on an adventure that takes him to a large abandoned orphanage on a Welsh island.

The book has been a New York Times best seller. It reached the #1 spot on the Children’s Chapter Books list on 29 April 2012 after being on the list for 45 weeks, remaining there until 20 May, when it dropped to the fourth spot on the list.Critics have generally praised the book for creative use of vintage photographs as well as good characterization and settings.