THE TWIN THING – I am not sure we knew Luke and Nell were twins before this. Of course Luke is 90 minutes older. So he is the 4th eldest and the focus of episode four. Luke is as much haunted by his inner demons as the ghosts of Hill House.

3:23 No ghosts here, but remember what happens to eyes in the fire. SCARY call back to this moment in a few hours..

So I am assuming I have missed something. I am staring at every corner of this frame. Similarly looking for more in the frame with Abigail above. None of the usual suspects as far as I can tell..

This light effect is not there in every shot, however that may be issue with angels etc. Not convinced.

Is that a painting or the tall man without his hat on the right.

WTF is that down the hall? Definitely not there a second ago. Compare with shot down the same hall above.

Another magic eye? As I stare at the sunset reflection, faces appear.

12:35 A ghost or the twin thing. Luke knows something is wrong, beyond the other siblings all waking up at 3:03am EST. At first, Luke thinks “GO!” is a call to action for finding his rehab girl friend.

Curious faces in the window pane?

14:26 FOR WHOM THE BELL TOLLS? This lady always freaks me out. Clara!

18:22 ONE OF THESE THINGS IS NOT LIKE THE OTHER – the first time we see the tall man? DO the dogs only bark when the ghosts are around?

21:36 Just when you thought it was safe to hide under the bed again… BAD CHOICE!

22:58 It really sucks to be Luke at Hill House. I blame mom for giving Luke the hat.

Missed Tall Man back there in this shot the first few times I watched.

26:36 Well at least this guy is consistent. I question whether this guy is a ghost or some imaginary reminder of the horrible ghoul from Hill House. Is LUKE the tall man?

At first the window dressings look like the tall man in another shot. But is there a misty apparition on the right there?

38:49 Luke is feeling even colder than usual, with cold sweats, stiffness in the arms & legs… THE TWIN THING is sensing Nellie’s from 3000 miles away.

There are three types of ghosts in The Haunting of Hill House. The ghosts the characters see. The ghosts they do not see quietly observing life. And then the shadows and other images freaks like me see.Like in this shot, I see a muppet-like grumpy old man with crossed arms judging Luke – “YOU FOOL”

Am I crazy or is there multiple faces laughing at Luke now?

I know this is graffiti but akin to the faces I keep seeing in other clips.

40:20 That’s not a ghost. Just a junkie. This episode is quite sad. Oliver Jackson-Cohen (Johnathon Harker form the 2013 Dracula series) is emmy worthy in this episode.

40:25 That is Fedor Steer as William Hill / Bowler Hat Man
Is this guy a CO-WALKER? Doppelgangers? I had a sudden idea that this manifest is more of a death omen. Curiosity plus google lead me to find the following… 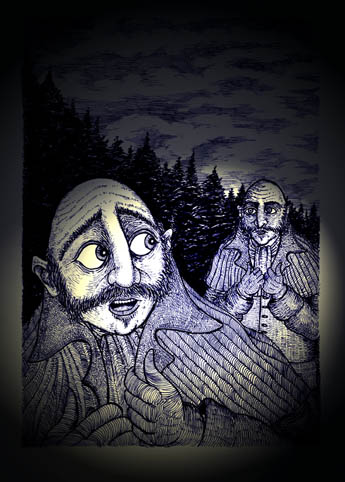 49:00 Back to Back – During initial viewing, THIS is the first time I questioned the true nature of this manifestation. Like a CO WALKER – this is a mirror, from the back side, with a bowler hat.

Cure kids but I do not think this charming technique is working. Is that a tiny ghost on the left. Looks like Jeff Dunham’s Walter puppet.