Star Wars: Episode I The Phantom Menace was not the movie we all hoped it would be. However, it has gotten a bad wrap by most fanboys. I still saw it three times in the theater. It is the only movie I have yet to watch start to finish since. So maybe that is a little telling.

I loved the pod race, the battle scenes on Nabu and Space and of course the epic light saber battle. This is a big movie that takes us to multiple worlds, dives deep into politics and social order and introduces the characters that will eventually

The writing was a bit week. Jar Jar became the biggest epic franchise joke of all time. Darth Maul, possibly the best villain of Star Wars History is killed off. And of course the WORST POSSIBLY EXPLANATION EVER of the force’s existence – MIDICHLORIANS.

FROM WOOKIEEPEDIA Midi-chlorians were intelligent microscopic life forms that lived symbiotically inside the cells of all living things. When present in sufficient numbers, they could allow their host to detect the pervasive energy field known as the Force.

The Beginning is a documentary on the making of Star Wars: Episode I The Phantom Menace, originally produced for the film’s DVD release. It covers the entire production of The Phantom Menace, from preproduction to casting to visual effects, editing, and theatrical release. The Beginning starts with early production work on the film, as George Lucas (returning to the director’s chair for the first time since Star Wars: Episode IV A New Hope) and Lucasfilm plan how they will bring his vision to the screen. Jake Lloyd auditions for the part of Anakin Skywalker and is eventually cast in the role, joining Natalie Portman (Padmé), Ewan McGregor (Obi-Wan Kenobi) and Liam Neeson (Qui-Gon Jinn). Lucas leads several meetings with ILM, including visual effects supervisor John Knoll, in an effort to figure out how Episode I’s many CGI effects would be accomplished — Jar Jar Binks, in particular, was a challenge, as digital characters were still new at the time. Other highlights from The Beginning include Steven Spielberg, a longtime friend of Lucas’, visiting the set and getting a first look at a battle droid prop; McGregor choosing his lightsaber hilt; stunt rehearsals offering a glimpse at how The Phantom Menace’s thrilling lightsaber duel between Obi-Wan Kenobi, Qui-Gon Jinn, and Darth Maul came together; footage of the first scene shot (Darth Sidious and Darth Maul’s meeting on Coruscant); a look at the editing of the film featuring early effects and the splicing together of different takes; Frank Oz operating the Yoda puppet and working out his performance; and finally, the opening night release of The Phantom Menace in theaters. 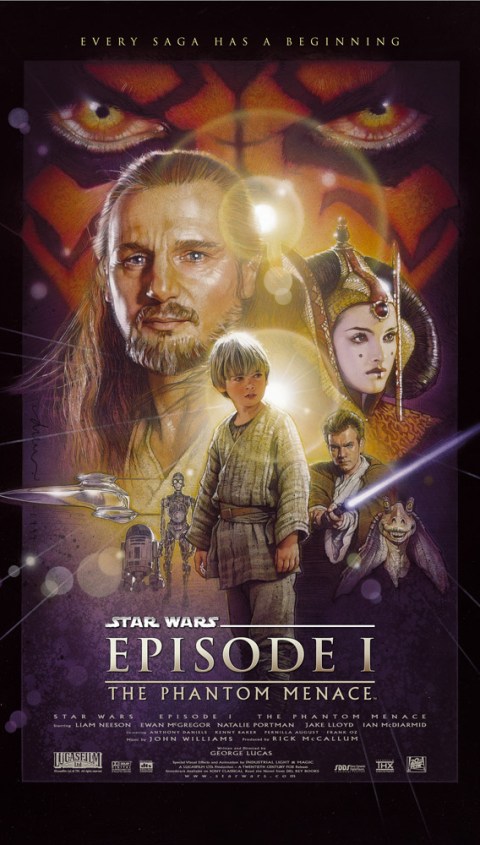 Stranded on the desert planet Tatooine after rescuing young Queen Amidala from the impending invasion of Naboo, Jedi apprentice Obi-Wan Kenobi and his Jedi Master Qui-Gon Jinn discover nine-year-old Anakin Skywalker, a young slave unusually strong in the Force. Anakin wins a thrilling Podrace and with it his freedom as he leaves his home to be trained as a Jedi. The heroes return to Naboo where Anakin and the Queen face massive invasion forces while the two Jedi contend with a deadly foe named Darth Maul. Only then do they realize the invasion is merely the first step in a sinister scheme by the re-emergent forces of darkness known as the Sith. Star Wars: Episode I The Phantom Menace was the fourth movie released in theaters.

Additionally, Samuel L. Jackson appears as Mace Windu, a high-ranking member of the Jedi Council who also opposes the training of Anakin. Ray Park portraysDarth Maul, a Zabrak warrior and Darth Sidious’ Sith apprentice who uses a double-bladed lightsaber, while Peter Serafinowicz provides Maul’s voice. Keira Knightley plays Sabé, one of Queen Amidala’s handmaidens who serves as her decoy throughout the majority of the film. Silas Carson portrays Nute Gunray, the Viceroy of the Trade Federation who leads Naboo’s invasion and tries to force Queen Amidala to sign a treaty to legitimize the occupation. Carson also portrays three minor characters: Jedi Master Ki-Adi-Mundi, Trade Federation Senator Lott Dod, and an ill-fated pilot (the role for which Carson originally auditioned).[18] Brian Blessed, Andy Secombe, and Lewis MacLeod voice, respectively, Boss Nass, the leader of the Gungan tribe who allies with the Naboo, Watto, a junk dealer on Tatooine who owns Anakin and his mother as slaves, and Sebulba, an aggressive, scheming podracer who is Anakin’s rival. In addition, Greg Proops and Scott Capurro voice Fode and Beed, the two-headed announcer of the Boonta Eve Race. Also, Sofia Coppola appears as Saché, one of Amidala’s handmaidens, andRalph Brown appears as Ric Olié, the Queen’s starship pilot.