ATTACK OF THE CLONES

Star Wars: Episode II Attack of the Clones is the fifth film released (2002) and the second in the story timeline. I actually prefer PHANTOM Menace. I have never been a fan of Hayden Christensen in this film. I think under better direction the casting and teen angst would have worked. The movie is saved by the sight of Yoda in a light saber battle. Similar to PHANTOM MENACE this movie did more to bring in young kids and promote future toy sales and cartoons and far less to satisfy the fanboys of the world.

Ten years after the invasion of Naboo, the galaxy is on the brink of civil war. Under the leadership of a renegade Jedi named Count Dooku, thousands of solar systems threaten to break away from the Galactic Republic. When an assassination attempt is made on Senator Padmé Amidala, the former Queen of Naboo, twenty-year-old Jedi apprentice Anakin Skywalker is assigned to protect her. In the course of his mission, Anakin discovers his love for Padmé as well as his own darker side. Soon, Anakin, Padmé, and Obi-Wan Kenobi are drawn into the heart of the Separatist movement and the beginning of the Clone Wars. 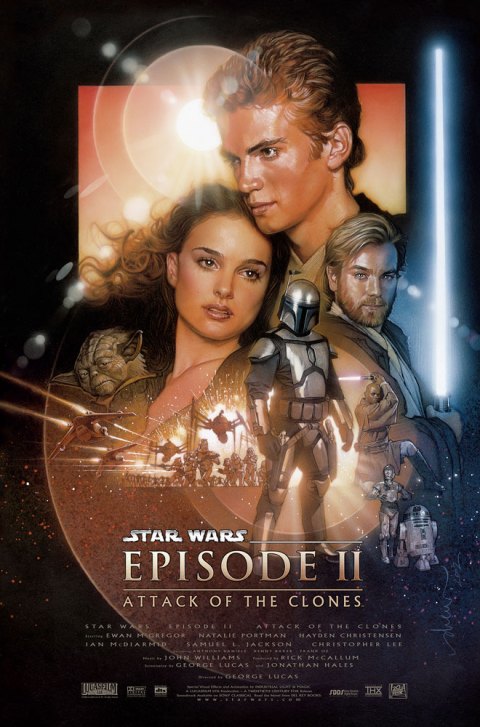 Ahmed Best, Pernilla August, Oliver Ford Davies, Andy Secombe, and Silas Carson reprise their roles as Jar Jar Binks, Shmi Skywalker, Sio Bibble, Watto, and Nute Gunray, respectively from The Phantom Menace, with Carson also portraying Ki-Adi-Mundi, a member of the Jedi Council. Temuera Morrison portrays Jango Fett, a Mandalorian bounty hunter who provides his DNA to use for cloning purposes in the creation of the clone army. Jimmy Smits portrays Bail Organa, a senator of the Republic, and Jay Laga’aia portrays Captain Typho, the head of security for Padmé Amidala. Daniel Logan portrays a young Boba Fett, Jango’s son, who is created from his “father”‘s DNA. Leeanna Walsman portrays Zam Wesell, a shape-shifting Clawdite bounty hunter and partner of Jango’s, who is given the task of assassinating Padmé. Jack Thompson portrays Cliegg Lars, a moisture farmer who freed and married Shmi, thus becoming the stepfather of Anakin Skywalker.Joel Edgerton and Bonnie Piesse appear as Owen Lars, the son of Cliegg Lars and stepbrother of Anakin Skywalker, and Beru Whitesun, Owen’s girlfriend. Ayesha Dharker appears as Jamillia, the Queen of Naboo, and Rose Byrne and Verónica Segura appear as Dormé and Cordé, Padmé’s handmaidens and the latter who serves as a decoy to the senator and killed during an assassination attempt.

A large search for the new Anakin Skywalker was performed across the United States. Lucas auditioned various actors, mostly unknown, before casting Christensen. Among the many established actors who auditioned were Jonathan Brandis, Ryan Phillippe,[5] Colin Hanks,[6] and Paul Walker.[7] Leonardo DiCaprioalso met with Lucas for the role, but was “definitely unavailable” according to DiCaprio publicist Ken Sunshine.[8] Co-star Natalie Portman later told Time magazine that Christensen “gave a great reading. He could simultaneously be scary and really young.”